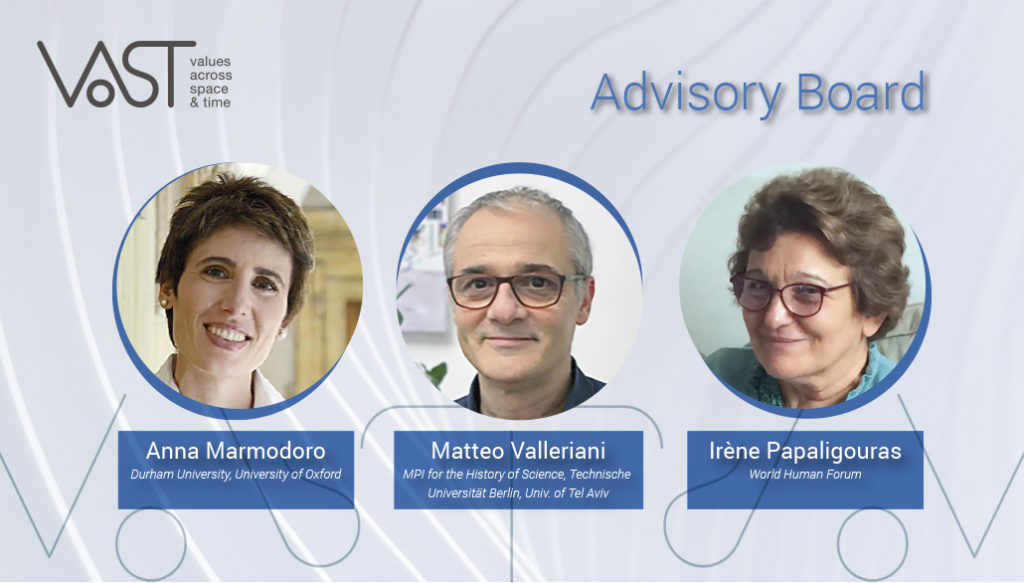 The VAST project has set-up its Advisory Board which acts as a consulting body that provides the VAST partnership with external guidance on its strategic objectives and deliverables. The Board consists of three distinguished members with top expertise in their fields.

Professor Anna Marmodoro holds the Chair of Metaphysics in the Department of Durham University since 2016. She is concomitantly as Associate Member of the Faculty of Philosophy of the University of Oxford.

She specialises in two research areas: on the one hand, ancient, late antiquity and medieval philosophy, and on the other, contemporary analytic metaphysics. She has also strong research interests in the philosophy of science and the philosophy of religion. In the history of philosophy, she has worked on an eclectic collection of topics, on Anaxagoras, Aristotle, Plato, Plotinus, the Stoics, Gregory of Nyssa, and Thomas Aquinas, and others. In metaphysics she is particularly interested in questions concerning fundamentality; composition and structure; the nature of properties, dispositions, relations; the metaphysics of substance; and causation. Anna has published monographs, edited books and journal articles in all these areas. Among her monographs, there are: Aristotle on Perceiving Objects, (Oxford University Press, 2017); Everything in Everything. Anaxagoras’s Metaphysics (Oxford University Press, 2017), and Forms and Structure in Plato’s Metaphysics (Oxford University Press, 2021).

Since 2008, Anna has been directing a large-scale multidisciplinary research group based in Oxford, with funding (in successive stages) from the European Research Council, the Templeton World Charity Foundation, the Leverhulme Trust, and the Arts and Humanities Research Council. She is also the founder and co-editor of the peer-reviewed journal Ancient Philosophy Today: Dialogoi, published by Edinburgh University Press (2019-). She has held visiting positions internationally, in Europe, the U.S. and Australia.

Professor Matteo Valleriani is research group leader at the Department I at the Max Planck Institute for the History of Science in Berlin, Honorary Professor at the Technische Universität of Berlin, and Professor by Special Appointment at the University of Tel Aviv.

He investigates the relation between diffusion processes of scientific, practical, and technological knowledge and their economic and political preconditions. His research focuses on the Hellenistic period, the late Middle Ages, and the early modern period. Among his principal research endeavors, he leads the project The Sphere: Knowledge System Evolution and the Shared Scientific Identity of Europe, which investigates the formation and evolution of a shared scientific identity in Europe between the thirteenth and seventeenth centuries. In the context of this project, Matteo Valleriani implemented the development of Machine Learning technology and of the physics of complex system in the humanities. The project is also part of the investigations led by Matteo Valleriani in the context of BIFOLD.

Among his publications, he has authored the book Galileo Engineer (Springer 2010), is editor of The Structures of Practical Knowledge (Springer Nature 2017), and published De sphaera of Johannes de Sacrobosco in the Early Modern Period. The Authors of the Commentaries (Springer Nature 2020).

After spending twenty years in the corporate world, Dr Irène Papaligouras founded Leaders Excellence Partners in 2010, working as a catalyst of cultural, behavioral and organisational transformation. Her clients include both multinational firms, SME/SMI and start-ups. An expert of the Values Perspectives Model she helps individuals and groups to assess and implement their priority values.

Irène is the co-founder of the World Human Forum, a think and do tank designed to highlight and interconnect the innovative forces of our planet towards the creation of a genuine ecological civilisation. Of multicultural origin and education, multilingual, Irène studied science and economics in the USA, Great Britain and France. She holds a Bachelor of Science from Brown University, a Master of Science from the London School of Economics and a PhD from Paris-Dauphine.

Irène is also a member of the strategic committee of SUMus, the Venice Regeneration Project and Happymorphose, a French think tank which aims to detect and interpretate the early signals of a humanistic metamorphosis.